Ghost of the Capitol Theatre

Excerpt from:
Chapter Twenty-Three
The Shadow of Your Smile 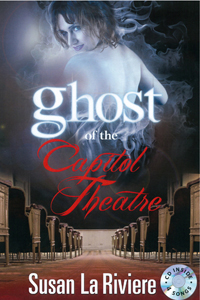 Her shadow approached him and he watched as two dark hands slipped under his palms and lifted his hands and arms up to the height of his shoulders. The sensation was similar to floating in water where his arms were buoyant as long as he relaxed. He pressed down and resisted. His arms floated downward as they would if he’d been in water. As soon as he relaxed again, she lifted his hands up then slowly brought them down to the arms of his rolling chair.

The room continued to be in a state of illumination but he could no longer see her shadow. Just as he was wondering what was next, he felt enough pressure under his armpits to lift him on his feet. Rex didn’t try to resist because he knew that she would not allow him to escape the room. He was her prisoner and the best he could do was to try not to panic.

Now that he was on his feet, his radio clicked on and he could faintly hear tunes that he was somewhat familiar with because they were theme songs to movies that he had shown in the theatre.

Rex looked at his hands and arms. They were in the position of a man holding a woman while they were dancing. Parts of his limbs were covered by a shadow and he could feel the pressure of a woman’s body against his chest, his shoulder and part of his neck and lower jaw. The scent of Chanel 5 wafted in the air and as he turned his head toward the shadow on his chest, the scent became more intense.

When he felt his body shifting from side to side, he didn’t fight the pressure from the ghost’s body. He no longer felt panicked. Rather, his body seemed to be floating in a gentle current.

Lords of the Moxee Valley

Except from:
Chapter Forty-Five
The Confrontation 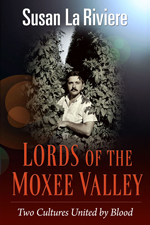 Valentina figured it was her last prom in high school so she wanted to have a good time with her classmates. After she and Domingo partied at The Freezer in Yakima, she checked her watch and saw that it was almost 2 a.m. She started to panic and was afraid to go home because she thought her father would beat her like he beat T-Luc.

“You can stay with us at the apartment upstairs from T-Luc’s café,” Domingo was trying to come up with a solution.

“It’s too late to call my parents and let them know that’s where I would be spending the night,” Valentina rubbed her temples. “I wouldn’t be surprised if my father has called the police by now.”

“It’s time for your father to know we’re a couple. We’ll walk to the door and I’ll explain that we were on The Ave in Yakima with our friends,” Domingo said.

“I’ve got to go home. I don’t think with mother there, that he would beat me. But she’s made it a habit of backing down from him in the past.”

“The longer we wait, the worse it’s gonna be so we need to head home.” Domingo opened the door of his truck for her. “I’ll stay at my parent’s house tonight. If there’s any problem, the back door will be unlocked.”

Their ride back to Moxee was sllent and they exchanged sympathetic glances. Domingo pulled near the gate at the Chanteur’s yard, got out of the truck and walked around to open the door for Valentina. Just as he had his hand on the gate and was swinging it open for her, they both jerked back as if they’d been shocked.

Victor was fully dressed and standing on the porch with the breech of his shotgun broken open and resting over his crooked arm. “Sir,” Victor addressed Domingo in a formal manner. “Do not take one step closer. You will not come to my house or date my daughter. Do I make myself clear?”

Figuring to disarm Victor with his charm, Domingo smiled and raised his hands above his shoulders and showed his palms in a surrendering gesture.

Just as Domingo’s hands moved up, Victor engaged the shotgun, raised it to his shoulder in a firing position and looked through the site.

Excerpt from:
Chapter 28
In The Barn 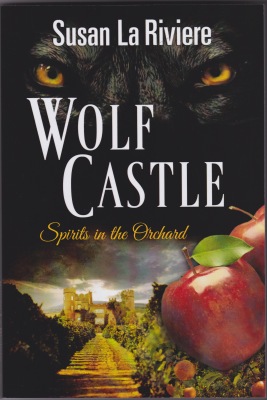 Mick stopped in his tracks when he looked at the barn. Sheba was sitting on a stool with her back against the barn. She was reading To Kill A Mockingbird and Mick didn’t know whether to run or to speak to her. Unable to move, he was confused about why this new girl was sitting in front of him when he wanted to go into the barn and look in his dead mother’s trunk filled with her clothes.

Sheba looked up, smiled and said, “Hi Mick, I hope it was okay that I visited you today.”

“What do you want?” Mick asked. He took a step back and prepared to run if she came toward him.

“I want to see your mother’s clothes and collectibles in her trunk,” she answered. “The door to the barn is unlocked. Let’s go up on the loft and look in your mother’s trunk.”

“Mom wouldn’t mind if you looked at her stuff?” he asked.

“I don’t think she would mind,” Sheba said. Mick followed her into the barn and up the ladder to the loft. She stepped out of Mick’s way while he scooped the hay off the top of the trunk. He could see there was a hanging padlock on the trunk, so he reached in his back Levi’s pocket and took out a small leather case, which he opened and selected a metal implement. He inserted it and moved it until the latch relaxed and the lock fell open.

After he lifted the lid, his mother’s perfume wafted up and Mick sniffed and said, “My mom smells good just like I remember.” He opened his baby book and looked at a lock of his hair pasted on one of the pages. “That’s my hair when I was a baby. Mama you loved me very much then and carried me everywhere with you. Do you love me now that I’m a grown up boy?”

Mick’s conversation with his mother brought tears to Sheba’s eyes and she pulled a lace handkerchief out of her pocket, dabbed at her eyes and blew her nose.

“This is the new girl, Mom.” Mick pointed toward where Sheba was sitting in the hay. “Her name is Sheba and she saw the wolf pups yesterday. She and Lily-in-the-pear-tree made some pretty twigs and leaves to put on their heads. Isn’t that silly? I think it’s silly to put twigs on your head no matter how pretty it looks. Oh well. Mom, remember how we used to play Go Fish? When you’re ready, we can play Go Fish anytime and Sheba said it’s okay to have three people play; that it’s more fun. Hope that’s okay with you.”

Mick’s monologue continued as he lifted and smelled his mother’s clothing then touched the fabric to his face. Without thinking about what he was doing, Mick held up the brown velvet hat with a veil that his mother had worn to church. He turned and placed it on Sheba’s head. Then he found some earrings and gently screwed them on her ears. Three scarves came out at one time and he separated them and tied one around Sheba’s neck then one around each of her wrists. She was being decorated as if Mick was putting ornaments on a Christmas tree. She smiled as he found a rust colored shawl and wrapped it around her shoulders. Mick wanted to see his mother’s clothing come alive and Sheba was most willing to oblige his fantasy.

“Oh Mom, you look so beautiful. Since you have all your church clothes on, now it’s time to go to the cathedral and get communion. That’s God’s bread, in case you didn’t remember. Jesus said we are invited to his table to eat his bread and drink his wine. So let’s go.”

Mick got on his feet and Sheba followed him as she began to sing, We Praise Thee O God Our Redeemer, which was a waltz tempo. She joined hands with Mick and stepped wide to one side then stepped wide to the opposite side. Mick followed her lead.